My earliest memory of the pumpkin as a cultural icon was when Linus van Pelt introduced The Great Pumpkin, a mythical figure with the benevolence and generosity of Santa Claus who is alleged to rise out of the pumpkin patch each Halloween night with his bag of toys for all the children. 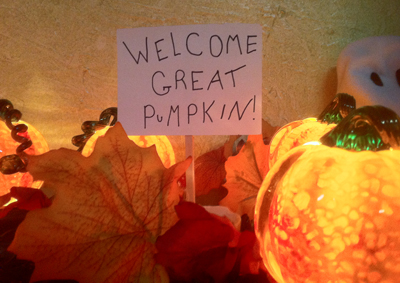 1966’s It’s the Great Pumpkin Charlie Brown is a satirical commentary on modern times. Halloween only became a mainstream, commercial holiday a decade earlier. What’s a holiday without a personification of that holiday? Christmas has Santa Claus. Easter has the Easter Bunny. For Halloween, Linus gives us The Great Pumpkin. But the Peanuts gang finds The Great Pumpkin too absurd, too unbelievable. Linus never loses faith, and despite a cold lonely night in the pumpkin patch, he remains convinced the Great Pumpkin will rise next year.

Maybe Linus was influenced by Cinderella who showed us that a pumpkin transformed into a golden carriage can deliver us to remarkable fortune. Over the years, I’ve realized that our society has more in common with Linus than we like to admit.

In her book Pumpkin: The Curious History of An American Icon author Cindy Ott tells the fascinating story of the pumpkin, from its humble cultivation to its rise as a formidable cultural symbol. By examining questions like why we drive out of our way to buy a vegetable that we will likely never eat, Ott characterizes our reverence for the pumpkin as an intricate connection between two otherwise disconnected worlds: our rural agrarian roots and today’s modern, wired society. Americans look to agrarian tales, imagery and seasonal rituals to forge a sense of national identity. In short, we are all farmers at heart, and the pumpkin has become a symbol of an idealized, purpose driven life that produces a harvest of wealth and happiness.

Our reverence for the pumpkin is more than just an escape to quaint nostalgia from the trappings of modern society. It has saved the very thing the pumpkin represents: the small family farm. The pumpkin’s economic value rose out of the meanings people have invested in it. So, maybe there is a Great Pumpkin, Charlie Brown, but like Santa Claus, its existence is metaphysical, manifested through personal and national traditions.

It’s with this reverence for The Great Pumpkin that we put together this season line of pumpkin-themed products.

Pumpkin's utility is often overlooked. It’s not just for eating, carving and decorating. It also can do wonders for your skin. Consider the pumpkin seed.

Pumpkin seed oil contains high levels of linoleic acid (43 – 53%), an unsaturated omega-6 essential fatty acid that moisturizes and softens the skin, keeping it fresh and youthful. Linoleic acid has been shown to help fight acne [1], and facilitate the absorption of active ingredients such as antioxidants in topical applications. 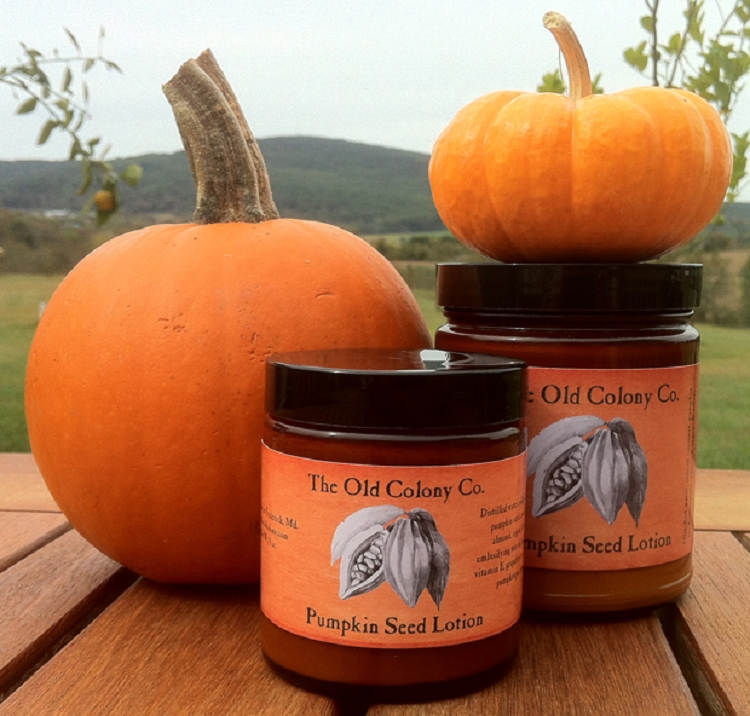 We complement the benefits of pumpkin seed with those of other high-quality, skin conditioning oils, including almond, avocado, argan & coconut. A dash of food grade pumpkin pie extract is added to give the lotion a light seasonal scent.

Pumpkin seed lotion can be used as an everyday body lotion on the face, hands or feet. This lotion is super concentrated, so a little goes a long way. Start with a small dollop on your index finger and add more as needed. This lotion absorbs easily and will leave your skin silky smooth. 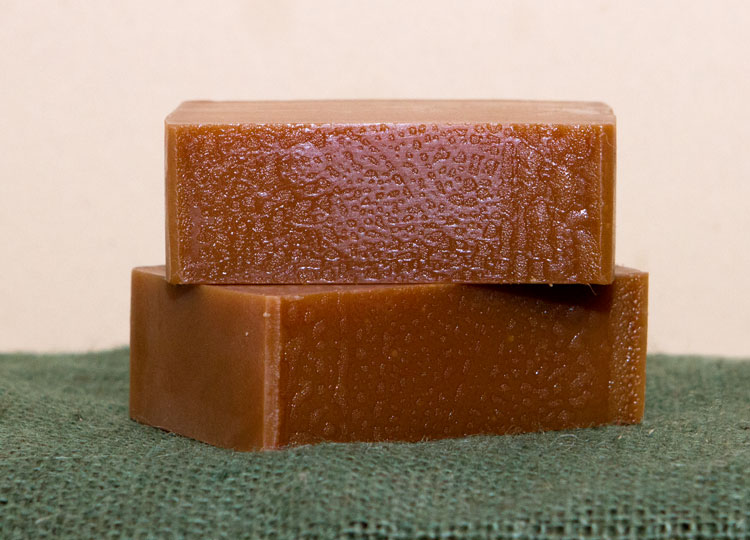 Back for an encore this season is our rich, spicy Pumpkin Chai Goat Milk Soap. The scent of fresh pumpkin is dominant but surrounded by chai spices. Together, these aromas produce the quintessential scent of autumn. Reflecting on pumpkin’s cultural significance, this bar embodies how we prepare the edible variety of pumpkin. Raw pumpkin smells like most varieties of squash - fresh, buttery and sweet but at the same time, bland and unremarkable. It’s only when we prepare pumpkin with spices such as clove, cardamom, cinnamon, allspice, and nutmeg does the pumpkin’s scent burst into a warm, comforting holiday aroma. Pumpkin chai soap evokes nostalgia while its touch of Marsala chai creates a modern aroma of a creamy coffeehouse latte.

I love making felted soap. It is my favorite creative outlet and artistic passion. I have the most fun felting this time of year. The change in seasons and holidays provide endless inspiration. Through felting I realized just how deeply ingrained the pumpkin is into the American psyche. After becoming more pumpkin conscious, it occurred to me that half of the autumn themed woolly bullies are pumpkin representations: from the pumpkin patch to the jack ‘o lantern in traditional orange and black, to the offbeat snow pumpkin. The pumpkin patch is also the most request felted soap this time of year. Oh, that Great Pumpkin does work in mysterious ways. 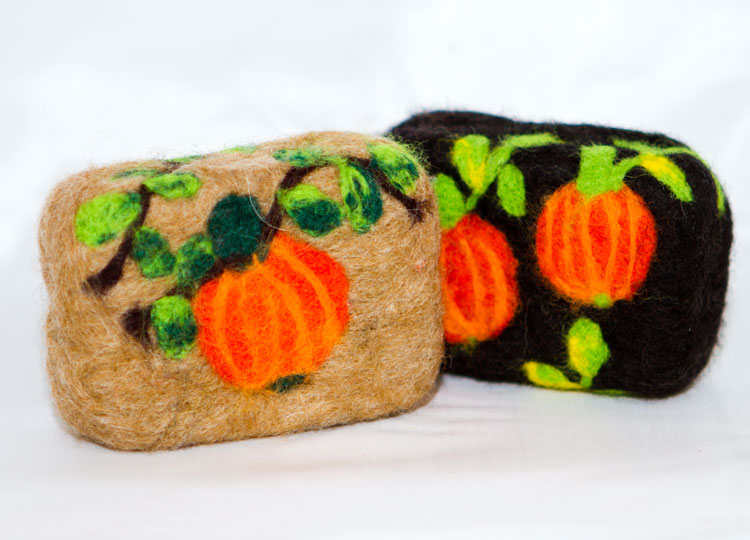 Fall scents such as Pumpkin Chai and Autumn Leaves wrapped in ultra-soft shetland sheep and alpaca wool create a warm, fragrant bar that gently exfoliates while moisturizing your skin and giving your entire bath or kitchen a quintessentially autumn aroma. When paired with a pumpkin design, these soaps make great, whimsical holiday accents and gifts, especially for those Great Pumpkin non-believers. 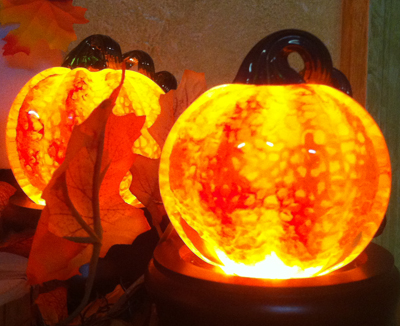 We are delighted to feature the exquisite work of Sherwin Art Glass Studio in our downtown Frederick store this season. We were first introduced to Chris Sherwin’s work by mutual friends in Bellows Falls, Vermont. Chris’ work captures the beauty of New England’s flora and fauna through techniques best described as “painting with glass.”

Of all his works, we were most taken with the pumpkins. Each pumpkin is a unique piece of fine art that can be illuminated by a light base. We are offer three sizes:

A light base can be added for $10 for any of the above sizes.

Currently, these pumpkins are only available in store and special order. If your would like to place an order over the Internet, please contact us.